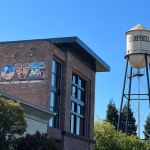 In late 2021 into early 2022, as part of the Stories for Solidarity Project, which provides historically significant public art display in Campbell, the Commission partnered with the Campbell Historical Museum. Large-scale art panels that covered storefronts in downtown San Jose during the social justice movement of 2020 sparked by the murder of George P. Floyd, Jr. were exhibited at the museum in conjunction with online discussions via Zoom and educational opportunities.

The Commission is currently engaged in new Explore Art series, which includes:

The Wall Mural Program seeks to enrich Campbell’s community identity and foster community pride by transforming ordinary walls around the city into distinctive works of art.

The original wall mural was painted on the side of Art Beat by artist Sarah Joy Cabana. Called the “Inheritance” mural, it was unveiled in November 2017.

The murals celebrate local artists and their artwork; acts as a deterrent to graffiti; and involves Campbell residents in contributing to the beautification of the city.

The Commission’s most recent art addition to Downtown was the Love mural that adorns the brick wall of the addition to the existing Opa’s building.

Typically, murals are 100% funded through sponsorships and individual donations by residents, businesses, and other non-profit organizations but in this instance, the City Council had approved a Site and Architectural Review Permit to allow for the construction of the addition with the condition that the developer would provide a ‘building art feature’ such as a mural on the wall.

The City Council referred the decision to the Civic Improvement Commission (CIC) to better facilitate public review and comment.

A Call to Artists was initiated and San Jose artist Lila Gemellos was chosen by a selection committee from all of the applicants. 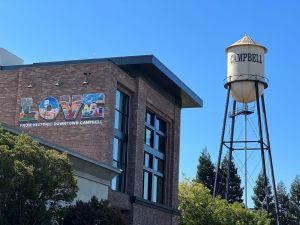 Within each letter incorporated iconic images that embody the history of Campbell.

ART OUTSIDE THE BOX

Art Outside the Box is a public art beautification program designed to transform common traffic control utility boxes in Campbell, into distinctive works of art.  This program offers numerous benefits:

Funded by a City or Public Entity or on Public Space, Public art is art in any media that has been planned and executed with the intention of being staged in the physical public domain, usually outside and accessible to all.

The program was launched in 2015, with 100% of the associated costs funded by donations and sponsorships. Volunteers prepared the boxes, ensuring they were ready for the artists, and Home Depot provided supplies and employee volunteers to assist.

Completed in four phases, a map and images of the final works of art can be seen here.

Neighborhood entrance signs are the first impression people have of their community. Their purpose is to enrich Campbell’s identity and foster community pride with monument signs that identify Campbell borders and neighborhoods with historical and agricultural themes.

This project engages residents, allowing them to work toward the common goal of improving and beautifying their neighborhoods. Potential neighborhood sign locations will be determined as the project progresses.

As with most of the Commission’s ventures, the "Neighborhood Entrance Signs" Project will be funded through private donations.

SERVE ON THE COMMISSION

​The Commission is a seven-member organization, but currently has two vacancies. The City Clerk's office is accepting applications for these vacant seats for terms expiring August 31, 2026.

To find out more about this exciting opportunity to serve on the Civic Improvement Commission, please click here.